All of my recent attempts at writing have come out ponderous, introverted, and, quite frankly, rather dull to read. So in lieu of boring you, I will instead post pictures.

Cattle are traditionally a sign of wealth and prestige, used more to confer social status than as a source of meat or dairy. The Nguni breed of cattle is unique to southern Africa.

I remember my mom once commenting that the only place she had ever seen razor wire in the U.S. was around prisons. Here, it is very common, often used in place of barbed wire and topping fences even in rural areas. It strikes me as a stark reminder of a sometimes brutal history and the still prevalent rates of crime.

Home visits in Khetani Township with the Isibani team. 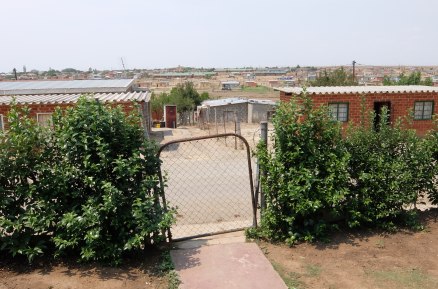 Looking out on Khetani Townhsip, with Celimfundo Primary School on the far hillside.

As of yesterday, I have exactly three weeks left in South Africa. Strangely enough, I’m nervous about returning to the United States. This has been the longest time I’ve spent overseas, and it’s the first time I’ve returned from abroad without having a school to return to.

Something I’ve not talked about much, that I generally avoid discussing, is my apathy toward American society. The best I can say of my attitude toward my country is that “it’s complicated”. That’s part of why I took the chance to leave, albeit temporarily. Now I find myself having to return (if for no other reason, my tourist access in South Africa expires three days after I fly out), and I don’t particularly relish the prospect. Not that I’ve ever expected to do anything different. I just haven’t thought about it much.

I’m not sure what to do with myself when I get back. I understand there are these things called “jobs” and that I should probably try to find one, but the process of searching for gainful employment is somewhat foreign to me. But I suppose I’ll cross that bridge when I come to it. After crossing an ocean or two, how hard can it be?