​Well it’s official. I am no longer a mere Peace Corps trainee, but a fully fledged Peace Corps Volunteer. And like a fledgling, I now face the painfully awkward growth of learning how to fly on my own.

I sit writing this in the luxury of my own house, where I will be living alone for the first time. It is still difficult to process all that has happened, even in the last week, and all I have to look forward to.

The last week has been one of many happenings. On Thursday, we formally closed out our pre-service training and spent a few final hours in Namaacha. Friday morning, bright and early, we traveled to Maputo for our swearing-in ceremony, all 43 of us wearing the tailored garb made from matching capulana fabric that is a tradition of swearing in to Peace Corps Mozambique.

The ceremony, held at the U.S. ambassador’s house in the capital, was short and sweet, at least by Mozambican standards, but it is still a Big Deal.  The director of the National Ministry of Health (in Portuguese Ministério da Saúde, or MISAU) attended for the first time, an important milestone for the health program. And the ceremony was apparently broadcast on national television (though I didn’t actually check to see).

Taking the oath of service for Corpo da Paz de Moçambique:
“I promise to serve together with the people of Mozambique. I promise to share my culture with an open heart and open mind. I promise to promote an understanding of the people of Mozambique with creativity, cultural sensitivity and respect. I will confront the challenges of service with patience, humility and determination. During and after service, I will embrace the mission of world peace and friendship. By the proud tradition and legacy of the Peace Corps, and in the spirit of the Peace Corps daily past, present, and future – I am a volunteer of the Peace Corps.”

As much as I tend to be skeptical of grandiose ceremonies, I’d be lying if I said I wasn’t excited and nervous as I repeated those words.

In true ceremonial style, everyone must give a speech, including our very own Eileen. (Not a very flattering picture.) 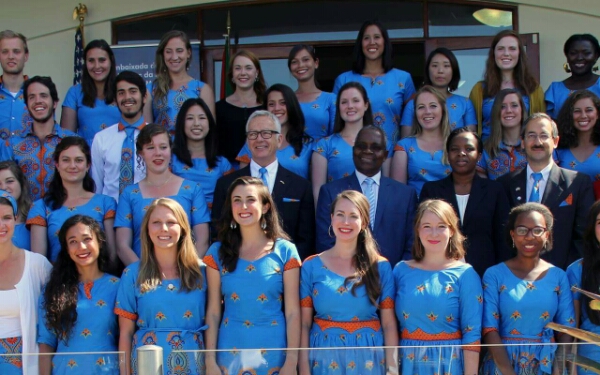 After the ceremony, on Saturday, we parted ways to our sites. After two days’ travel and a taxi, airplane, rideshare (boleia), bicycle taxi, chapa (the local name for the minibus taxis ubiqitous in this part of the world), and kilometre on foot, I arrived at my new home.

And that’s all for now.